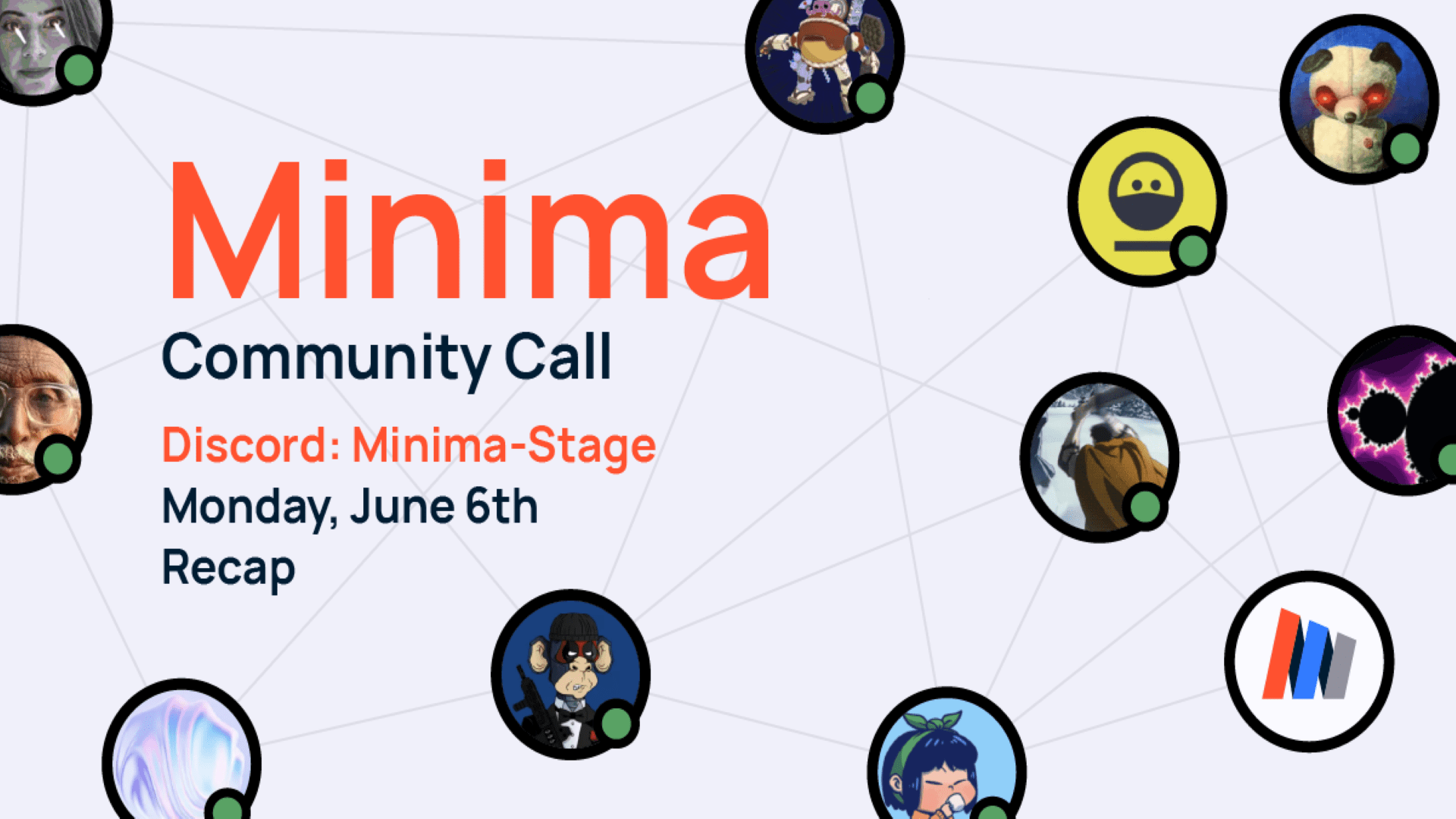 Thanks to everyone joining our community call last week, on Monday, June 6th at 14:00 UTC. You can listen to the recording of the call here.

In this blog post, we’ve summarized the most important updates and discussions we had. This time, on-stage, we had Jazmine, our technical communications manager, and Luke, our Head of community. The call was moderated by our Social Media Manager, Naomi.

What have you been working on in the last month?

Jazmin: I am happy to announce, you may have already seen, our new team member on the channel: Neo. I’ve been onboarding him to the team; he’s joined as a community manager and is a discord whiz, which is a great addition. We’ve been working on an educational journey for the community to teach people who aren’t so familiar with blockchain to work themselves up from a foundational understanding of blockchain to becoming a Minima professionals.

Could you share how you got to Minima and what you’ve been doing before?

Neo: My story before Minima is a bit weird; it might be familiar to some of you. I helped around the Pi Network in the moderation team in the early days. And I stayed for 1,5 years and then joined a group chat with someone interested in my profile. One person there then linked me up with Luke, and now I am here working with the community team, mainly Jazmin, on putting together an education path. It should be done soon, so looking forward to showing that to the community.

How did you learn about blockchain?

Neo: “I was only introduced to the crypto world when joining Pi. And the problem with that project was that they didn’t speak about anything other than Pi, so I wasn’t very aware of what else existed. Eventually, I started learning about other blockchains and cryptos and taught myself.“

What would you build if you could build anything on Minima?

Neo: That’s a good question. I don’t really have time to think about it in-depth, but the first thing that comes to mind is a marketplace. A decentralized marketplace. At the moment probably an nft marketplace.

Community Member of the Month

This month, our community member of the Month was Monthrie, who joined us to share his experience in the blockchain and crypto space. He also laid out what kind of project he’d like to build on Minima: a stablecoin backed by kilowatt-hours in renewable energy.

To learn more about Monthrie, find our dedicated post about him here.

You can also listen to the segment where we had him on stage here.

Trends and events we found noteworthy?

Jazmin: The first thing that comes to mind is Solana going down again, the third month in a row. Interestingly they ended up coordinating a re-start using discord, so there is a lot more room to go.

The only other thing I observed was the Goblintown NFT, which was a free mint, and seems to be the next craze with the current floor price being 5 ETH with no roadmap, no utility — which sums up the current NFT marketplace.

Luke: The downturn in the market has, of course exercised pressure on a lot of companies. And on the one hand, it’s good for projects like us because we can offer real value and utility, but it also generates a lot of regulation. In South Korea, there have been new laws due to the Terra debacle, and Japan recently limited the ability of private businesses to hold stablecoins. I suspect this will only continue as a trend with growing regulation.

With everyone seeming to compete in the wallet space, what broadly are wallets, and is that even a good term to describe what they do?

Jazmin: People think that they hold their crypto in their wallets, but what they actually keep are their private keys.

With hot wallets, there’s a high risk of attack, whereas using cold wallets, they are never connected to the internet, highly reducing the attack surface. Of course, with cold wallets, one has to be responsible with their seed phrase because once lost, there is no one to go to.

What do you look for in a wallet?

Jazmin: I quite like the combination of using something like Meta Mask with a ledger, where your private keys are safely offline, but you can still continue using dApps easily.

Your take on self-custody?

Luke: For me, that’s the only way to be. I didn’t think much about it when I first gave my coins to an exchange a long time ago, but when that exchange collapsed, and all my coins were theirs, I realized I shouldn’t be doing that. So now, I keep most of my coins offline and only bring them online when I really need them.

Jazmin: I think it’s essential for anyone coming into the space to educate themselves on these tools. If we really want to have a self-sovereign route, then part of that journey is knowing how to self-custody your assets. Maybe you tell people you trust your seed phrase to restore your assets in case you forget it.

Barry (Minima Commercial Team): The thing to remember is that everyone is speaking about digital sovereignty. Minima is all about being sovereign and not relying on anyone else. That’s why it’s up to us, the individual, to keep track of our own coins and to be responsible. And that extends to each part of their crypto life.

The best wallet for me is a brain wallet, where you can put in any seed phrase you want, something very personal only you know, and then you can add can create private and public keys using this.

Not your keys, not your coins.

What is the difference between the MMR and a DAG?

Jazmin: I think a better comparison would be a DAG (directed acyclic graph) and a blockchain. A DAG is not a blockchain, it’s a different way of organizing transactions, where individual transactions are connected, but not necessarily in linear fashion. In IOTA they call it tangle, so you can think of it as a tangled chain of transactions rather than blocks.

In terms of similarities both in Minima and DAG each transaction contains a small amount of PoW and they are feeless. But beyond that there are quite a few differences, and the discussion surrounding if DAGs can come to consensus in decentralized way is continuing. It seems they are more vulnerable to attacks then blockchains.

How much has been invested and who are major investments?

Luke: We’ve raised around 9 million in our Seed, and Series A, and are also currently raising our Series B which we’ll talk about in the near future. Among our investors are Blockchange Ventures, GSR, AGE, SMO Capital and Big Brain Holdings.

Are you thinking about a transition to Proof-of-Stake?

Luke: Short answer is no. We don’t see the need to move to PoS because with our iteration of PoW we’ve managed to address all the issues in current PoW systems.

Jazmin: To add to that, PoS tends to become more unequal over time because it favors the ones who already hold stake in the system.

Any plans to add translated versions to the Incentive Program website?

Luke: We’re always open to that. The best thing to do is reach out to us directly, and we’ll see how we can make it happen and address any specific issues.

Will the android app have an auto-update feature?

Jazim: Yes, for the next release we’re working on getting it in the Google Playstore, so users will receive notifications whenever there is an update. On top of that we’ll be adding push notifications to the app.

When will the iOS version come out?

Will there be a Wallet?

Jazmin: Yes of course. Once we bring back the miniDapps it will be available for you to store, send and receive tokens.

A huge thanks to everyone who joined us, and posted questions. We’re looking forward to seeing you during the next one.