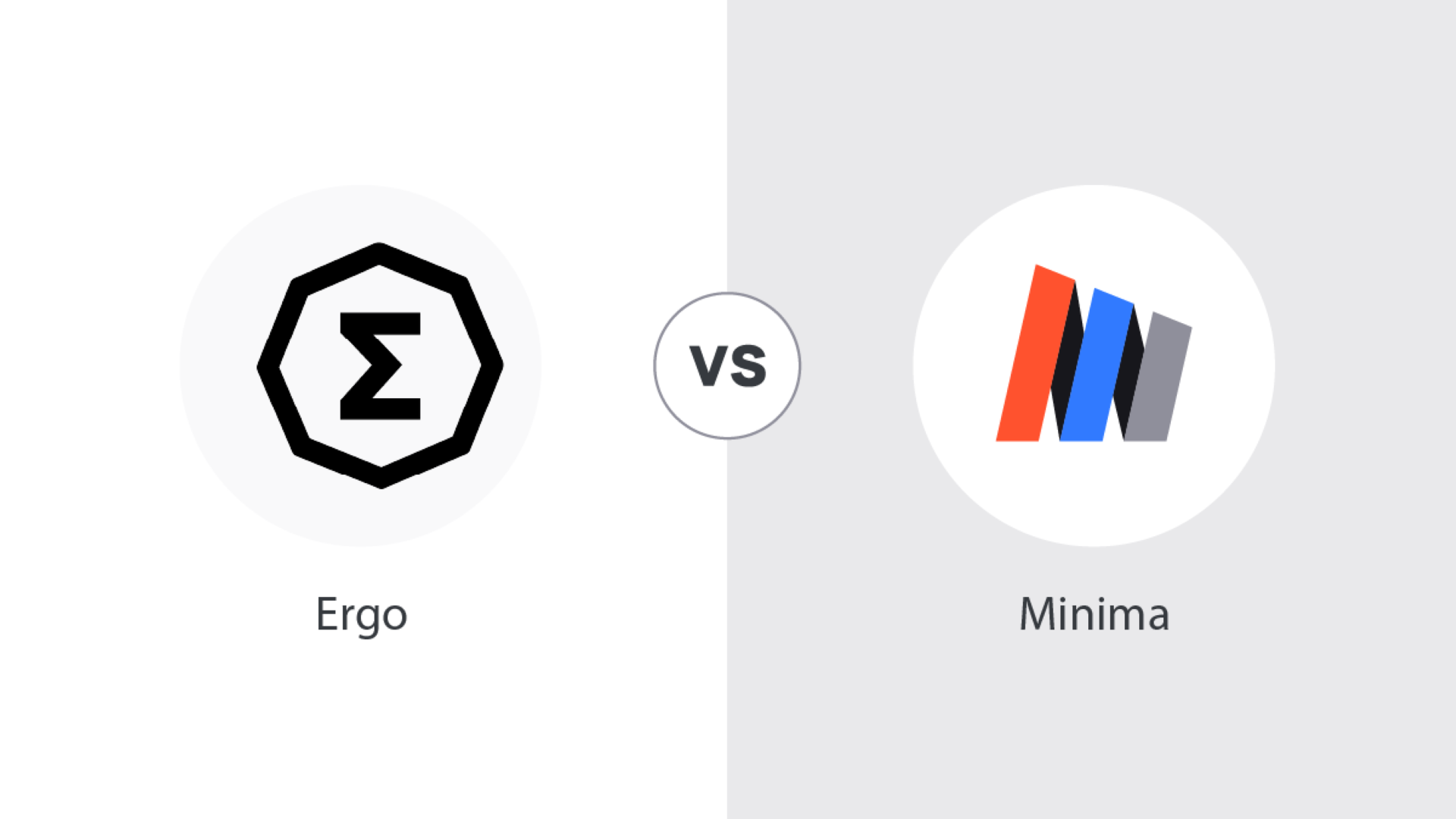 Bitcoin is the most famous Proof-of-Work blockchain but by far the only one. In its early days, it experienced various forks that gave birth to the likes of Bitcoin Cash or Litecoin.

And even nowadays, where most new protocols run Proof-of-Stake, some, like us, chose Proof-of-work for its fairness and ability to create an equal network. Which makes you wonder, how is Minima different from the others?

It’s hard to read through all those protocols’ documentation and figure out how they are different. So we do the work for you. Let us know which chain you’d like to see a comparison with, and we will make it happen.

Ergo was a request coming through our Discord server because it’s another notable Proof-of-Work chain. Let’s start with the basics.

Alexander Chepurnou, a blockchain veteran who’s been involved in the early development of Bitcoin since 2011, and Dmitry Meshkov launched the Ergo mainnet on the 1st of July 2019.

Both had seen the challenges with the increasing adoption of Bitcoin and the increasing dominance of mining pools and aimed to create a more efficient platform that enables the implementation of financial contracts.

Just like Minima, Ergo is a Proof-of-Work blockchain that supports the creation of smart contracts and attempts to prevent miners from gaining dominance.

It processes roughly 6458 transactions per day and has a hash rate of 14.57 TH/s. To put that into perspective, Ethereum’s PoW chain currently has a hashrate of 208 TH/s, orders of magnitude bigger, which doesn’t necessarily equate to secure, as that has more to do with the distribution of hash power.

Another interesting aspect of Ergo is that it uses sigma protocols.

Sigma protocols are a powerful, flexible class of efficient and composable Zero-Knowledge-Proof (ZKP) protocols. In short, ZKPs enable a party (A) to verify information from another party (B) without B ever having to reveal the actual information. You can find an in-depth explanation of that technology here.

The use of these sigma protocols, represented in the form of signatures in the context of blockchain, enables some exciting use cases involving the state of the chain, such as:

‘If the deadline block height has been reached, Alice can provide knowledge of a secret key for a refund. OR a ring signature from Alice and Bob is required to spend coins.’ Or ‘If this account holds a minimum of 100 ERG, Alice OR Bob can remove funds above that amount.’ (Source).

One more unusual feature of ergo is its storage fee. When users transact on blockchains, they end up with dust, small amounts of crypto with little value, yet it requires storage. For a blockchain, it’s helpful to clean up and improve storage efficiency. So Ergo charges storage rent for long-term storage on the blockchain. Users who haven’t moved their UTXOs for four years will be charged ~0.14 ERG + a transaction fee for further storage.

Note that the rent is a flexible parameter and can change over the lifespan of the protocol.

Now that we established a general idea of what ERGO is, we move on to contrast it with Minima. And we will start with what’s crucial for a blockchain.

Ergo: As mentioned previously, Ergo is a Proof-of-Work blockchain. Their native proof-of-work mechanism is called Autokylos and was developed with two characteristics in mind:

ASICS are Application-Specific Integrated Circuits, a type of chip specialized for mining PoW cryptocurrencies. Commercial miners quickly drove individuals out of the mining market because they couldn’t compete with these specialized machines.

The Ergo team chose a memory-hard PoW mechanism to reduce the disparity between the specialized hardware and the commodity GPUs to enable anyone to mine.

Pool resistance is achieved by forcing miners to share access to their wallets’ private keys whenever they want to mine. This would mean they have to trust each other because any one miner could run off with the other’s funds. While an excellent idea, it doesn’t seem it has worked out, at least if one is to believe the MiningPoolStats presented for Ergo, clearly indicating the existence of pools.

As you can see, Hashrate seems somewhat unequally distributed on Ergo.

Minima: Minima is also using its variation of Proof-of-Work, called Transaction Proof-of Work (or Tx-Pow), to secure the network. However, unlike Ergo, we have not picked a memory-hard algorithm or a unique pool-resistance feature.

Instead, we did something very different, where anyone with a device as small as a smartphone can be a complete node, validating and constructing the blockchain. Instead of “miners” competing to find the correct hash, on Minima, every user collaborates, providing little proof-of-work, adding up to whole blocks’ worth of work.

This means that everyone is equal, and no one has more power in the network than anyone else.

Ergo: To run an ergo node (a node that also mines), the team recommends 8 GB RAM GPUs. If you have some confidence in your system admin skills and aren’t afraid of the command line, you should be able to set up a node in under an hour.

Minima: The smallest device a Minima node can currently run on is an Android 9.0 +. All you have to do is download the Minima mobile app, and you’re part of our growing decentralized network.

Ergo: Ergo users can still interact with the blockchain using their phones through Light Clients. Thanks to something called non-interactive proofs of proof of work, they can verify that a specific event happened without having to connect to the network or download the entire transaction history.

This allows more passive users to store their coins without having to be online all the time. However, it’s not quite the same as running an entire full node as, eventually, it will still rely on other full nodes to construct the chain for one.

Minima: Download the apk, and you run a full validating and constructing node. That means it’s not just passive participation but actively contributing to the blockchain, its security, and adding new blocks. We believe that this is the only way to establish true censorship resistance. Where no one can keep you from broadcasting your transactions, you don’t have to rely on anyone else to execute them.

Ergo: As a native blockchain, Ergo is powered by its native token ERG, which is currently trading at around $1.88.

It’s an eventually deflationary currency that is hard-capped at under 100 million ERG without any long-tail emissions. The initial block rewards paid for miners decreased from 78 to 51 and will decrease to 0 in 2027.

To finance the ecosystem development, for the first two years since Ergo’s mainnet launch 10% of each block reward went to the Ergo treasury. From that point onwards, the treasury rewards have been halved every 6 months until the treasury ceases to receive any funds from the protocol.

Prior to that, the treasury had no income, as the team decided to bootstrap the venture and give 95% of their token supply to the public.

Minima: Minima’s native token has a maximum supply of 1 billion. There won’t ever be more than that in existence. A burn mechanism that governs network traffic, and regulates transactions will over time reduce the supply, making it a deflationary currency from the start.

51% of tokens are going directly to the community through our Incentive program and other initiatives. You can learn more about our allocation here.

There are no block rewards, which disincentivizes any attempts to create pools, or gain power in the network. True decentralization is enabled by the collaboration of thousands of nodes, as of today, nearly 200,000 individuals already run Minima nodes.

Ultimately, the choice is yours. That is a part of freedom. We just provide information to help you make more informed choices.

Do you want to be part of a network where you are equal to everyone else, and can freely communicate, and transfer value with anyone else?

Then download the Minima app now, if you haven’t already. 💪

Let us know any other protocols you’d like to see a comparison to on Discord, just tag one of our team and we’ll make it happen.